The world is hard up for simple things. I don’t mean the artificial simplicity of politics, religion, or social argument. I mean things that naturally abound-exploding sunsets, rippling streams, the sighing of the wind, the chirping of crickets. Beauty. Mystery. Wonder. Essential truths that connect us, in an age of frightening greed and disregard to the core of life itself. 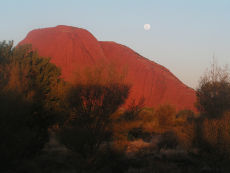 live in the southwestern part of the country. At daybreak a raven sits in the juniper tree outside my window and awakens me with a persistent call. In that voice I recognize a wild, unbroken continuity. For a moment, I see him against the searing heat of an extinct volcano that used to erupt not far from here. He endures.

On my back patio a little olive-drab lizard, looking like a miniature dinosaur, pushes himself up and down in the sunlight. In his goofy aerobics I see a reflexive motion as old as the first reptile. He offers reassurance whenever I’m afraid. He, also, endures.

The coyotes who prowl the nearby wilderness serenade me all night long. When I listen carefully, I realize they are singing many different songs. In their voices I sense the excitement of a language older than words. Those coyotes not only endure, they survive all of man’s attempts to kill them with poison, bullets, or steel traps.

Simple truths are what get lost amid the anxiety of our technological world. The vacant look of teenagers milling around shopping malls – bothers me. So do the harsh voices of politicians and religious leaders, telling us what we may or may not do with our lives. Spiritual bankruptcy is manifest in computers, call waiting, application forms, income tax forms, interstates, snowmobiles, fast-food chains, network TV, Wal-Mart, Disney, and all things plastic. The world is reinventing itself into conformity, trivia, and dehumanization. Koyaanisqatsi, the Hopi call it: turmoil, despair, life out of balance. Centuries ago, they predicted the moral and spiritual crisis that is crippling our nation today.

The Pueblo Indians of New Mexico have been my friends for more than thirty years. They taught me to examine the depths of a wild rose, to ponder the meaning of fresh leaves, sleepy turtles, river stones, and passing clouds. They took me into the mountains, where I felt a mysterious healing grace. They showed me how to lie facedown on the earth, to rediscover the cyclical nature of leaves, flowers, and grass. They taught me how to listen. How to catch the wind. How to converse with streams. How to accept the raven and the coyote as my spirit guides. How to recognize my fragile connection to all life that has gone before and all that will follow after.

Thus, when I hold an ancient Indian grinding stone in my hand, I imagine that long-ago woman, kneeling over a stone metate to grind corn or to pound wild meat until it was tender enough to roast over coals. If her life was hard, there were rewards: watching the same white clouds that I see above my head, walking the same red earth, breathing the same pure air. I feel a kinship with her when I find pottery shards scattered in the wilderness. Who was the woman who painted those simple designs on a clay pot? What did she think about when she worked? Did her children live to grow up? Was she loved?

Native Americans have lived on this continent some twenty thousand years. They based their lives on everyday experience and created a religion from it; they had no words for sin, guilt, or redemption; no concept of heaven or hell. Each individual was responsible for himself or herself; each worked for the greater good of the tribe. Their actions were justified by an intricate system of beliefs unacceptable to European invaders, who managed to destroy, in little more than five hundred years, nearly everything native people had held dear for millennia.

Native Americans did not invent bombs, wheels, chemicals, or concrete; they did not create environmental pollution, urban sprawl, traffic jams, or crime. In their world, the Great Spirit abided in all living things, offering harmony, meaning, and acceptance. They did not have to look far to discover a sense of purpose in their lives; as the sun rose, so did they. As trees lived and died, so did they. Each moment offered a unique lesson. When spring came, they noticed blossoms and birds. When a bear crossed their path, they invented a story. Songs came about through joy, sorrow, or mystery. Night and day assumed deep, spiritual meaning, as did the powerful sun, the ever growing and shrinking moon, the rotating pattern of stars, the magic of each season. All this was part of the expanding, never-ending whole.

My own experience has been largely here in New Mexico, though the Southern Utes and the Ute Mountain Utes of Colorado were part of my learning process, too. Since 1961, when I first met a Taos Pueblo medicine man, I’ve felt as much kinship with the Indians as I feel with ravens, lizards, and coyotes. They – and we – are of the same material, the same essence. It’s taken a while to understand that Native American wisdom, so envied by non-Indians, so imitated and so abused, is basically an awareness and appreciation of the complex, magical world around us. Nature, not us, is what keeps on giving.

To the Pueblos of New Mexico, the Twelve Great Paths of the Moon are part of that awareness and appreciation. The moons they watch are the moons of their ancestors and of children yet unborn; they are our moons, too, inviting reflection on our lives and on the alarming condition of the world. For it is not through war or violence that lives and nations are changed, but through application of old, enduring truths. These truths have no label – Christian, Jewish, Muslim, or Buddhist – for they are simply our most basic connection to one another, to origins, and to a future that must contain the promise of ages past.

I offer here my own interpretation of the Twelve Great Paths of the Moon, a series of poems and meditations to help each of us on our journey.