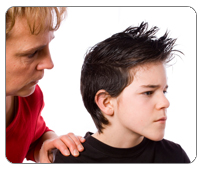 When youâ€™re the parent of an acting-out child, itâ€™s easy to feel as if youâ€™re to blame for their behavior. As a result, you can fall into the trap of trying to fix things for your child instead of letting them deal with the natural and logical consequences of their behavior. In this interview, James Lehman explains some of the ineffective roles parents fall into, and tells you why itâ€™s important to identify what youâ€™re doing so you can changeâ€”and help your child change, too.

It doesnâ€™t matter whoâ€™s to blame, what matters is whoâ€™s taking responsibility.

EP: How do parents fall into the trap of taking responsibility for their kidsâ€™ behavior?

This is a natural process, but unfortunately, sometimes it evolves into doing things that arenâ€™t constructive. On top of that, as your child gets older, you might find yourself taking responsibility for his acting-out behavior because you start to feel like itâ€™s your fault.

This is how your relationship with your child can become a game of emotional blackmail: he has learned to take the stance of, â€œAgree with me or face my attitude.â€ Parents end up getting stuck in certain roles that accommodate this stanceâ€”roles that arenâ€™t healthy in terms of getting their child to take responsibility. They may play these roles throughout their kidâ€™s early childhood, adolescence, and early adulthood.

EP: What are some of the most common roles parents fall into when they start assuming their childâ€™s behavior is their fault?

In the Total Transformation Program, I identifyÂ seven ineffective parenting roles. When weâ€™re talking about feeling guilt and taking on kidsâ€™ responsibilities, I think some roles to consider are: The Martyr, The Ticket Puncher, Bottomless Pockets, and The Savior Roles.

EP: James, when youâ€™re in one of the ineffective roles, you might not even realize youâ€™re being ineffective. How do you know?

JL: Well, you often donâ€™t. And by the time you realize it, itâ€™s often been going on for quite some time. Parents in these roles are constantly playing catch-up. As their children evolve, and test limits and act out more, these parents are always trying to catch up to them. If you see yourself in one or more of these roles with your older child, chances are youâ€™re still trying to play catch-up, but the train has already left the station.

You keep doing the same thing, and your child still keeps acting out, or the behavior escalates to a point that feels beyond your control. I remember working with parents who had young adult children in their early twenties who took no responsibility whatsoever. The parents paid for their cars and their insurance. Their children lived at home and were often very demanding about meals, having guests over, and everything else. Many of these kids couldnâ€™t or wouldnâ€™t keep a job, but they always blamed the company and the manager when they were let go. They did not know how to take responsibility. One family that I worked with never confronted their adult son or held him accountable. After awhile, he gave up on getting a job at all and just lived off his parents. The last I saw of him, he had pulled a knife on his father. The police were called and charges were pressed, but sadly, it was too little too late.

EP: What if you feel responsible for making your child like this in the first place?

JL: Thatâ€™s a good question. Parents need to remember that thereâ€™s a difference between responsibility and remorse, guilt, or shame. I tell parents all the time that it doesnâ€™t matter whose fault it is, what matters is whoâ€™s here today in the office. It doesnâ€™t matter whoâ€™s to blame, what matters is whoâ€™s taking responsibility. Of course parents make mistakes. Of course they inadvertently get into negative patterns and behaviors raising their kids. But half the battle is to understand what those patterns are and to work on changing them.

Some parents have easy kids who do what theyâ€™re supposed to do, and they learn how to comply as a coping skill. These kids learn that very early on, and they spend their adolescent years trying to comply. They might rebel at some point, but they donâ€™t do anything abusive or nasty. My message to parents is that you may feel guilty about some things that you did, you may feel bad about them, but the bottom line is that if youâ€™re seeking knowledge, if youâ€™re seeking parental guidance programs, if youâ€™re reading this article, then youâ€™re taking responsibility now. And that is to be respected. Youâ€™re going to have feelings of remorse and guilt. Parents often do.

Many divorced parents feel this acutely. But the bottom line is that youâ€™re not perfect, you make mistakes. And starting today, if you can learn to do something differently, then youâ€™re taking responsibility. Now, expect your child to react with a lot of anger and hostility when you do try something different. There will be a lot of blaming and a lot of blackmail. Your child may say, â€œThis is all your fault; this happened because you and Dad got divorced.â€ He is going to resist any limits you try to set.

Thatâ€™s why I believe parents need to have a plan. Figure out ahead of time how youâ€™re going to start holding your child accountable. Parents need to have an outline of what theyâ€™re going to do to hold their child responsible if and when their kid rebels. Once you do that, youâ€™ve got to be pretty straight about it. Talk to your child about what will be changing and what theyâ€™re doing, but do it when things are going well. Donâ€™t have this conversation after a conflict or a fight. When things are calm, sit down and introduce some ideas to your child.

EP: How can you stop martyring yourself with your kids? What is the responsible way to get them to be accountable for themselves?

JL: Letâ€™s say today is the first day youâ€™re realizing, â€œOkay, I have to change the way Iâ€™m parenting my child or heâ€™s never going to be able to get up on his own two feet.â€ How do you do that? I think one of the things that you need to do is to identify yourself with the ineffective parenting roles that youâ€™re playing and work on changing them.

There are also effective parenting roles that Iâ€™ve identified in the Total Transformation. These roles are the Training and Coaching Role,Â Limit-Setting Role, and the Problem-Solving Role. I think parents should find that kind of information and learn a different parenting style. Itâ€™s very important that parents get some background information and know what they want to accomplish. I believe that if parents learn these three basic roles, theyâ€™ll become more effective in getting their kids to perform.

I think kids need training and coaching much more than they need therapy. Acting-out kids need to learn the skills that will allow them to do things they need to do to feel better. The Problem Solving Role: Help your child to problem-solve and learn new skills. Do a little interview with a short discussion. â€œI think Iâ€™ve been doing too much for you, but I realize thatâ€™s not healthy for you or for me. What do you think you can do differently the next time I ask you to clean your room? What can you do to remind yourself that you can’t expectÂ Dad or meÂ to do it for you?â€ And see what your child says. If he doesnâ€™t give you an answer, help him out. â€œWell, you could clean it yourself.â€ And then remind him what you talked about when the time comes for him to take care of his responsibilities.

The theory is this: If you get your child to do his chores or homework, heâ€™ll feel good about himself and have a better attitude. Remember, you canâ€™t fix his attitude. Once you take responsibility for your childâ€™s attitude, youâ€™re hurting. And youâ€™re stuck, because then every time your child frowns, youâ€™ve got to make it a smile. A lot of parents take on the responsibility for their childâ€™s attitude. They end up treating their kids like theyâ€™re infants. But the bottom line is that the Limit-setting parent sets out expectations really clearly and makes things task-oriented. The beauty of it is that youâ€™re teaching your child how to comply by behaving his way to better feelings.

EP: Is it possible for the adult child, who has never taken care of himself, to change?

JL: Absolutely. Positively. People change all the timeâ€”even older children with ingrained habitsâ€”but they donâ€™t change voluntarily. And Iâ€™ll tell you something, change is not as difficult as you think. People just need a plan for change. The difficulty comes with the resistance to change.

Empowering Parents is a weekly newsletter, online magazine and parenting blog published by Legacy Publishing Company. Our goal is to empower people who parent by providing useful problem-solving techniques to parents and children. The views expressed in the articles on Empowering Parents represent the opinions of the authors and the experts quoted therein. Unfortunately, itâ€™s not possible for us to respond to every question posted after an article on our website. Empowering Parents encourages its readers to participate by weighing in with suggestions and advice. For more information, visit www.empoweringparents.com

Other Articles about Parenting